Where did we get to? Oh yes, I remember… I was in ‘yellowland‘ having the nasal prosthesis removed under sedation. That’s just over a year ago now and I guess you’d like to know how my head has been in the interim? Here goes…

When I returned to see the surgeon for a check-up, it was lovely to be able to report that I’d had no headaches or active infection since the prosthesis had been removed. However, I also had to report that the healing of my nasal septum had broken down again and this was confirmed on examination. We both looked at each other in disbelief. What to do next?

I was given two options… return to Nottingham for advice or do nothing and see what happens. I chose the latter as I couldn’t stomach the thought of any further intervention. A month later, I went to discuss the situation with my GP. I wanted to find out if there could be an immunological explanation for my long history of infection and failure to heal. My GP agreed to run some blood tests.

A month later, when I was in the throes of a bad flare-up of infection in my head, my GP phoned with the blood results. I did indeed have a ‘blip’ in my immune response which was considered worthy of further investigation. A letter of referral was sent to the local hospital requesting an appointment with the immunology team. I expected to wait months for this appointment within the public system but within a week, I’d been called into the hospital to undergo a rigorous assessment of my immune system. When I queried why I’d been seen so quickly, I was told that I was a “fascinating” case and as a result, I’d been bumped up the waiting list. My hopes were raised. 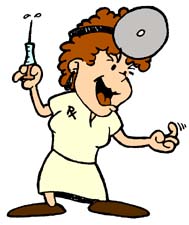 Three hours and many blood tests later, I left the hospital having been thoroughly grilled on every aspect of my medical history… and also examined from top to toe. I couldn’t believe the thoroughness of the assessment. Following the blood tests, I was injected with the pneumococcal vaccine, started on a long-term prophylactic dose of antibiotic, two new inhalers (one oral, one nasal) were added to my prescription and I was given a date to return for pulmonary function tests.

When I returned to the hospital three months later for all the test results, I had high hopes of receiving news of a breakthrough. The appointment turned out to be a complete anticlimax. I didn’t get to see the consultant as had been promised. Instead, I was told by a seemingly bored, doctor that the blood tests confirmed a minor defect in my immune system… no IgM factor… and that there’s “no treatment available for it”. The tests had also confirmed my allergic status, asthma etc. and I was simply told “Keep taking the pills and come back in a year’s time for review.” Hopes dashed again.

The good news is… since undergoing the original immune assessment, I’ve only had one acute infection in my head since last June and I’ve also had fewer headaches. This is an all-time record! I’m convinced this progress is due to the continuous prophylactic dose of antibiotic. In the past, I’ve been on antibiotics for months at a time but never, for a year at a time. It’s seems such a simple solution and apparently, can be continued indefinitely. The question is… why didn’t someone think of this before?

So… progress of sorts. My nasal septum has still not healed and I’m due a check-up with the surgeon next month.

Tune in next week and I’ll tell you about my tooth extraction which… wait for it… failed to heal!

The following alternative medical definitions of some common words come courtesy of The Washington Post:

Flabbergasted : appalled over how much weight you have gained.

Abdicate : to give up all hope of ever having a flat stomach.

Esplanade : to attempt an explanation while drunk.

Coffee : the person upon whom one coughs.

Negligent : describes a condition in which you absent-mindedly answer the door in your nightgown.

Lymph : to walk with a lisp.

Flatulence : emergency vehicle that picks you up after you are run over by a steamroller.

Testicle : a humorous question on an exam.

Circumvent : an opening in the front of boxer shorts worn by Jewish men.

Joking apart… having put up a blog post yesterday (it’s been a while), I’ve been encouraged to update my personal journey as a patient.

I shall endeavour to put up a post by the end of the week… even if I have to stand up to type it. Watch this space!

Use it or Lose It!

When it comes to protecting the brain, it’s thought that certain lifestyle factors may help your brain to stay healthy. Neuroscientists suggest that by keeping your mind active, taking exercise and maintaining social interactions, you can help to reduce your risk of developing dementia.

The brain is a learning machine. To keep it strong, you must continually develop new skills. In other words… keep pushing those boundaries!

Here are seven ways to keep your brain active and healthy as outlined by Prof Ian Robertson, Professor of  Psychology at Trinity College, Dublin…

1. Physical Fitness: Take aerobic exercise… exercise that gets your pulse racing a bit. Fast walking for 20-30 mins a day, is good for your brain and your heart. If you’re not used to taking regular exercise, get checked out by your doctor first.

2. Mental stimulation: Do something new and engaging… maybe volunteering. Find something you love doing. Engage with other people. This is a critical protective factor.

3. New learning: We get lazy as we get older. We should all be constantly learning. Learn a language/learn to sing/improve your computer skills.

4. Reduce stress: A bit of stress is not a bad thing. Challenge is good for us… pushing the boundaries. However, prolonged and severe stress is detrimental to brain function. Find a method to reduce stress… music/self-help books/yoga/meditation/relaxation.

5. Keep socially active: The denser a person’s social network, the less likely they are to be diagnosed with Alzheimer’s disease. Other people are a source of enrichment of the brain. Maintain social contacts.

6. Eat a healthy diet: What’s good for your heart is good for your brain. Eat fish (omega 3)/veg/fruits (richly coloured) and keep to a low saturated fat diet.

You can listen back to *Marian Finucane’s interview with Prof Ian Robertson here.